I read the latest Shriver Report A Woman’s Nation Pushes Back from the Brink.  The statistics were not surprising to me. We have made great strides in some areas but only for a small percentage of women.  All my life, I have known personally the plight of women in America.  For me, it started at age 5, when my parents were divorced.  My mother was proud, independent and refused child support if it meant having to share custody with my father.  Women had few rights at that time. From that moment in 1962 she was a single mother with three girls and no outside income.  I was the oldest. So she went to work. We were fortunate to have the support of her family.  We first lived with my grandparents and later moved to our own home in the “Projects” or subsidized housing.  In between, we  shared a house with my uncle.  He worked nights and my mother worked days. My mother worked two jobs at times and so we never qualified for  free rent, food stamps or medical care.  It was not easy for her to accept any handouts.  She once tried to stand in line for free Christmas gifts  on her only day off.  She was successful but would never waste another Thursday that way again   At times she was frustrated  over the need to have her brothers co-sign for any loans she made because she had the better credit and always paid her bills on time.

She is from a long line of strong women in her family that started with my great-great-grandmother. They have shaped the person and physician I would later become.  They are a loving and caring group of women. They have cared for all of us in one way or the other and been paid care-givers at times.  I know they all worked for less money than they deserved. I too have had to face pay inequity.

We did not get health insurance until my mother could pay for it. So we received care from the Community Health Center and the Dental Clinic at the University of Alabama in Birmingham. I did not know how far below the poverty level we were until I applied for financial aid to attend college in 1974 and later medical school in 1978.  My mother made sure we had the best of what we needed and much of what we wanted. However, she taught patience and gratitude. These lessons would later serve me well.  As we look at the plight of women, divorce is one that causes significant loss of income for women and children. If fathers are not supportive, there is no support for college. I did qualify for federal loans and repaid them once I started earning an income. 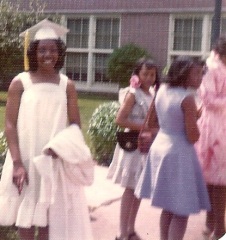 When I started my practice in 1990, a large percentage of my patients were women who worked every day but made too much to get Medicaid and food stamps and, whose employers did not provide health coverage.  If they worked and had health insurance, they were providing coverage for the entire family because their spouses worked for employers who did not provide health insurance.  Like my mother, many of them were divorced. Their children received needed vaccines under the Vaccine for Children Program (VFC) and they could qualify for the Breast and Cervical Cancer Early Detection Program (free pap smears and mammograms).  However, sick care was an out-of-pocket expense.  Their children could get sick care from the Health Department Clinic.  The Affordable Care Act will change this for women and children.  However, the real solution as pointed out in the report is to raise the minimum wage and to have equality in pay for women.  Another key point in the Shriver Report is that to improve the plight of women will make significant gains for men and children. Women are the primary wage earners in a large number of families where there are children.

One of my favorite quotes from Dr. Martin Luther King:

“The curse of poverty has no justification in our age. It is socially as cruel and blind as the practice of cannibalism at the dawn of civilization… The time has come for us to civilize ourselves by the total, direct and immediate abolition of poverty”.

I am a physician and it is  difficult for me not to support the ACA.  As a child of a single mother who overcame all the odds and made it possible for me to go to college and medical school, I have to support measures to raise the minimum wage and ensure equity in wages.

As we celebrate the Dr. King Holiday tomorrow, let’s recommit to serve others .

13 thoughts on “Caring for Patients: Women and Poverty”