I try to reinforce to my doctors in training the importance of getting a social history from their patients.  Where do they work, what are they job responsibilities, where they live, do they drive and of course family connection?  This also includes a sexual and history.  The last is the substance abuse history.  More and more, patients are admitting to use of marijuana which doesn’t surprise me.  The opioid pain-killer and heroin use is hidden from us when we ask but we have to start pushing to get the answer.   We have to be more comfortable discussing opioid misuse and abuse with our patients.

I have found that our Black and Latino population does not use drugs in the numbers we would think.  The myth of their increased use had been perpetuated in the news media until recently. We have a large Latino population in our practice.  Most of our Black and Latino female patients do not smoke drink much less use drug.  Our Caucasian patients are more likely to be smoking marijuana, drinking socially, using opioid pain killers and heroin.  That is a fact that is now just being openly discussed and represented in the news media.  This graph shows the shift.  You would be wrong to think this represents more Non-Hispanic whites seeking help than Non-Hispanic blacks.  It clearly shows the dramatic increase in the number of addicted white patients 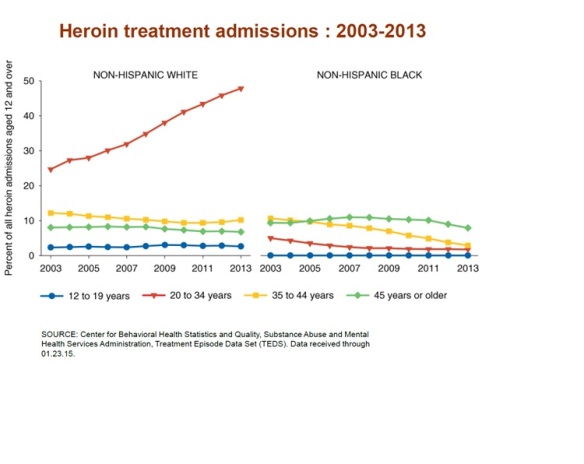 I was a medical student and a resident during the devastation of the Black community from drug addiction and AIDS and the cruelty of the “War on Drugs.” We asked for more drug treatment and needle exchange programs.  We got more prisons, harsher jail sentences and cutting of funding for treatment.  Now the face of the addiction epidemic has morphed from the Crack Cocaine addicted black face to the Opioid Addicted white face with an epidemic proportion of overdoses and deaths.  No jail time.  I remember that tragic scene from “Lady Sings the Blues” as Billy Holiday (Diana Ross) is locked up and withdrawing in such pain and agony.  Congress has the opportunity to right a terrible wrong by increasing the funding for the Opioid epidemic.  That will not erase the harm done to our community but it will finally acknowledge that addiction is a medical problem. The psychosocial problems that Americans face and are now leading to lack of hope must also be addressed.

The other issues in the Health Bill such as keeping funding for Planned Parenthood, keeping the mandate for coverage of contraception and maternity care are crucial to the health of women. White females are dying at higher rates from opioid overdoses.  Their rate is higher than that of Black and Latino women.  White males now have the highest rate at present.  Drug use among white suburban teenagers is increasing while it is decreasing in Black and Latino teens.  These are just the facts.

Some part of me is angry that the Black community had to suffer such devastation without much help.  Black and Latino teens will always be arrested and serve time for drugs.  They can’t get into medical or law school. They are limited in their career choices. Now whites, are still less likely to serve time because their parents call for treatment and less strict drug enforcement is being heard.

I started reading The New Jim Crow: Mass Incarceration in the Age of Colorblindness by legal scholar Michelle Alexander. I had to put it down because it evoked such emotion.  All the people in the on-line book group I was in had the same feelings. “Black people comprise just 13 percent of the U.S. population and use drugs at a similar rate as other racial and ethnic groups – but they comprise 29 percent of those arrested for drug law violations and roughly 35 percent of those incarcerated in state prison for drug possession only.”  These are the facts.  Until we as a country address this issue, we cannot move forward in the treatment of addiction as a medical not legal problem.